When Ramel ‘Smooth’ Bradley (’08) grew up in the Clinton Hill neighborhood of Brooklyn, New York, he was acutely aware of the food insecurity surrounding him. His love of basketball equals his passion for helping his neighbors, and that has never changed.

Bradley, the only son of a powerful black single mother, recalls that when he was 8 or 9, his grandmother, Bishop Alethia Rice, came to live with him and his mother, Daisy Rice. He said his grandmother instilled in him the ethic of using what he has to help everyone he can.

“All I wanted to do was play basketball, to become a professional athlete,” he said. “But every time I came from the park, from playing basketball, I had a list of deliveries that I had to make to members of the community, because we would sell food and give food to food insecure people.”

Bradley said his grandmother had a passion for starting a mission to take care of the weak, desperate and hungry. She transformed her kitchen into a place where she prepares hot meals, a spiritual food for hungry neighbors.

“You taught me that no matter where you come from, what language you speak, we all need food, fuel and encouragement,” he said. “It’s the main thing that makes me who I am today.”

Bradley said that while growing up, he was more focused on honing his basketball skills than perfecting his schoolwork, but then he was offered a scholarship opportunity to attend IMG Academy in Bradenton, Florida. IMG is a preparatory boarding school and athletic training academy. She was more famous for golf, football and tennis at that time. Bradley was able to be a part of the academy’s first basketball program and develop into one of the top 100 teams. Then University of Kentucky basketball coach Tubby Smith noticed Bradley’s skills and recruited him to join the Wildcats in 2004.

Ramell Bradley was a fan favorite when he played with the Wildcats. photo provided by UK)

“Everyone knows Kentucky is the most profitable program in the country,” Bradley smiled. “Coach Smith said he could really use my skills in the UK. He also went to Brooklyn to talk to my mum and grandmother. They prayed for it, and I decided to come to the UK.”

Being a student-athlete had its stresses and its fun. Choosing a field of study was not the easiest thing to do. Bradley initially thought of majoring in commerce, apparel and textiles.

“I wanted to be a professional athlete and have my own clothing brand,” he said. “It was a little confusing and I couldn’t get the program to work with my basketball schedule, so I spoke to my advisor Michael Stone and he asked what else I care about. I said, ‘Feed people,’ and my advisor said I need to study agriculture.”

Not really wanting to focus on productive farming, Bradley found a good fit with the Department of Community Development and Leadership at the UK’s School of Agriculture, Food and Environment and Professor Emeritus Laurie Jarkowitz. Bradley said Jarkovic enabled him to pursue community work.

“I felt empowered by learning how to become a better leader; learning how to serve my community,” he said. “It wasn’t until 10 to 12 years after I got this degree that I realized it was the best choice I ever made.”

Bradley has experienced some unique stresses as a student-athlete. He said he felt like everyone on campus knew him and that was fun, but it was also stressful because all eyes were on him.

“(Being a fan favorite, and student-athlete) made my experience interesting in many ways,” he recalls. “But I went to college thinking ‘Oh, I’m going to celebrate and be with my mates,’ but being a student-athlete and being appreciated everywhere forced me to set an example of how to study, on time, representing my team, my brothers, the UK and the country. So, it was kind of like “Well, let’s grow old now; Let’s do the right thing because people are watching you. It made me a responsible young man much faster than just going to parties and letting life come to me.”

After graduation, Bradley spent time with the New Jersey Nets before eventually deciding to go abroad and play professional basketball in Croatia, France, Israel and Turkey.

“It was a dream come true in many ways,” he said. “I’ve always wanted to study abroad but playing basketball in college didn’t let me. I have to go to another country, hug it, and all while playing basketball. Maybe my favorite place was Israel. I played there for four years, but I managed From winning a championship and some great honors in Turkey.”

In 2016, Bradley learned that his grandmother’s health was deteriorating, and decided to take a break from basketball and go home to help. She had diabetes and was suffering from the effects of it and heart disease.

He said, “I’m educating myself more and more…I’ve learned that millions of people are dying from chronic diseases now, not just in America, all over the world.” “For me to see my grandmother go through… She is my inspiration… She is my heart. I just needed to stop basketball and help my grandmother and the other people.” 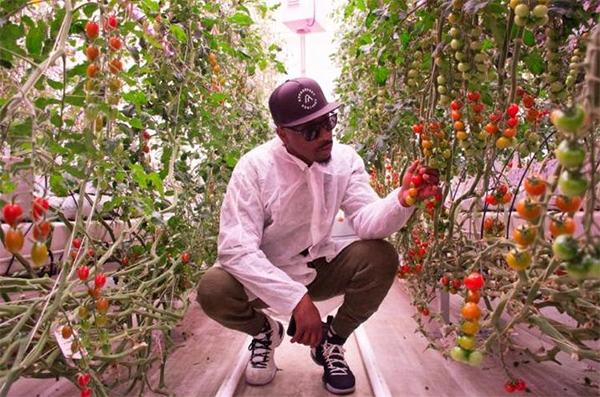 Ramill “Smooth” Bradley is the Community Manager at AppHarvest. (Photo submitted by Ramil Bradley, via UK)

Bradley returned to New York and recreated the pantry in his grandmother’s neighborhood. They have partnered with some of the largest organizations in New York City to feed up to 2,500 people each week.

“At the time, my friend Jonathan Webb called me and told me he needed me to use my degree in agriculture,” he said. “I told him I was home and wouldn’t leave Brooklyn, and I told him what I’m doing, feed people. He told me I could get to a bigger scale.”

Webb is the CEO of AppHarvest, an agricultural technology company with a vision to feed the world. They are rooted in Kentucky, with large, environmentally controlled farms in Morehead, Richmond, Somerset and Berea. They plan to make Appalachia the AgTech capital of America, feeding and empowering people and creating jobs. They plan to operate 12 high-tech indoor farms by the end of 2025.

“Jonathan told me he wanted me to go to Pikeville and help him build a farm on top of the mountain where they were extracting coal,” Bradley said. “I realized that some things like chronic diseases, lack of access to healthy food that plagued my grandmother and people in Brooklyn were the same things that plagued people in rural Appalachian communities. Feeding 2,500 people was amazing, but we had a chance to help,” Jonathan said. into feeding millions of people using modern agricultural technology. How can I say no to that?”

“I’ve lived in many places, but moving from Brooklyn, New York, to eastern Kentucky was definitely a culture shock,” he said. I’ve been working with high school students teaching them how to grow in 40-foot shipping containers. The students were listening to the same music we listened to in Brooklyn, and we found common ground. They would get up at 6:30 a.m. to come learn farming and we listened to ‘Old Town Road’ together… Country kids and a guy from Brooklyn, it was perfect.”

Job title Bradley is Community Manager. He continues to work with the AgTech program, but also travels around telling the AppHarvest story to community organizations, nonprofits, and college students, and he supports the talent acquisition team to help find the best talent in the region and beyond. He said he would tell students who want to follow his career path that finding the right career is about putting your passion into action.

“It’s not rocket science,” he said. “We feed people healthy food, create jobs, and protect our environment. If this is something you care about, you definitely want to know more. Earning a living in something has a purpose and allows you to nurture your community and extend quality of life through accessible, healthy food It is a gift. Oftentimes, we have this vision, this idea of ​​the life we ​​want to live, and then thrive, life happens. If throughout this journey, you stay true to yourself and do things that you care about, then in a way, the creator makes everything Fine “.

Bradley is also giving back by working with the award-winning UK branch of Agriculture, Natural Resources and Related Sciences. He was not aware of MANRRS while studying in the UK but now feels strongly about his participation.

“Coming from Brooklyn, I didn’t really realize I was a minority studying agriculture, but now I’m in a position to make an impact on the next generation,” Bradley said. “When you see the statistics, less than 1% of farmers are black, and many of our communities are black segregated. We have a lot of work to do.”